Did you know that 12% of people that try to purchase tickets end up getting scammed? Fake tickets make up a massive industry, with over 5 million people buying and attempting to use counterfeit tickets yearly.

Not only do these tickets present financial risks, but they can disrupt the seating, organization, and planning of your entire event.

Luckily, smart ticket security can help you identify those fake tickets immediately — helping you rid your event of scammers and unplanned guests.

Securing your tickets against fraudsters is all about making them as unique as possible.

You want all of your tickets to share some similarities — which helps you organize, distribute, and track them. But, you also want them each to be identifiable on their own.

In other words, you want two layers of security: individual and group.

Let’s go over a mix of group and individual ticket security methods that can keep your next event fraud-free.

5 ticket security trends to keep out the FAKES

Over the years, we’ve personally tested out a plethora of ticket security features. Today, we’re going to talk about our five favorites.

Our Purplepass ticket solution uses everything mentioned below, and we believe that the combination of the following is the single most effective way to prevent ticket fraud.

There are a ton of benefits to printing barcodes on your tickets. For starters, barcodes reduce employee headaches and minimize manual ticket touchpoints.

They’re also inexpensive, easy-to-track, and they display instant information on the status of the ticket. But, we’ll ignore all of that for a moment.

Now, that may sound a little too good to be true. But, the introduction of barcodes onto your tickets completely changes your ticket checking workflows.

In the past, employees were responsible for identifying fakes alone. With barcodes, checking for fakes is an innate part of their check-in process.

Counterfeit tickets without barcodes will be recognized immediately, and you won’t have to rely on event help to identify this overwhelming surge in counterfeits.

But, barcodes are only the first line of defense. What if someone manages to fake those little black lines?

Let’s say your event is dealing with some serious counterfeiters.

Or, more likely, you’re dealing with someone who knows how to trick barcode scanners. It’s possible.

The counterfeit Super Bowl ticket industry is worth $24 million, and there have been indictments by the US Attorney General due to the rise in these fake tickets.

The problem with barcodes is that ALL of your tickets share the same barcode.

This helps barcode scanners understand the product, and it helps all of your tracking software to understand overall ticket sales.

In other words, barcodes aren’t only for loss prevention. They’re an essential part of your overall ticketing workflow.

This is where serial numbers come into play. While all of your tickets share the same barcode, each ticket will have only one serial number.

These serial numbers (typically displayed above or below the barcode) can be used to identify fake tickets. Since each ticket has its own serial number, you can quickly identify some fakes out of a crowd, right?

Well, some of your software maybe able to. But, what about your employees?

At Purplepass, we do everything in our power to simplify event ticketing. And, that means making anti-theft and anti-counterfeit, well.... anti-difficult.

Here is one tracking feature that also works for security; all tickets have sequential tracking numbers at the top.

So, let’s say that someone was able to masterfully craft a fake barcode and a fake serial number, sequential tracking numbers let your employees immediately know something is up.

If the number doesn’t line up, the ticket is fake.

This makes spotting a fake easy. But, for the sake of argument, let’s say that a counterfeiter also figured out the sequential number pattern.

Small, tamper-evident holograms can be placed onto the back of tickets to add an extra layer of security.

Since holograms are extremely difficult to replicate, these small holograms can significantly bolster your security efforts.

Not only do these holograms make your tickets look better, but they add more fraud prevention. 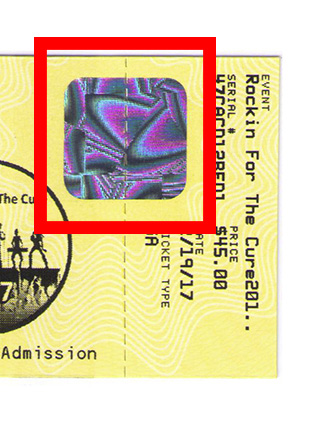 We’re getting to the point where ticket replication is almost impossible outside of authentic methods. But, we know that some of you are putting together some incredible events.

So, you may have some of the savviest ticket-fakers in the country after your show.

And, maybe... just maybe... one of them is good enough to fake the barcode, fake the serial number, figure out the sequential pattern and manipulate it, AND reproduce a hologram.

Well, you should congratulate them. Because they’re really, really good. But, if you have this next security measure, you’ll be better. 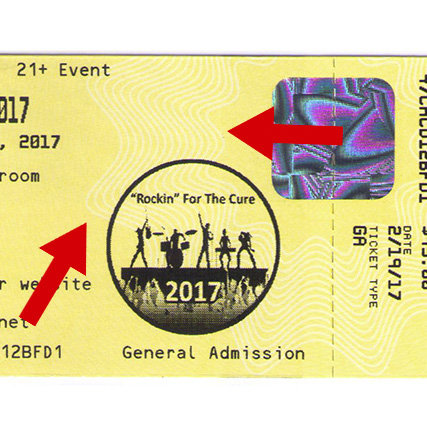 Do you know how modern banknotes or our I.Ds have all of those intricate patterns all over them?

Those are called guilloche patterns.

And we put those on our tickets.

Attempting to replicate a guilloche pattern is nearly impossible. It would take incredibly expensive equipment, tons of time, and an immense amount of resources; by then, they should just buy the ticket.

In other words, it’s like putting a safe around your tickets. Those cool, swirly patterns are your ticket (no pun intended) to a fraudless event.

How Purplepass can help keep your event safe

If you want to learn more about how incredibly secure our ticketing system is, you can contact us through support@purplepass.com or request a free demo of the site below.

8 Trends Taking Over Event Technology In 2019 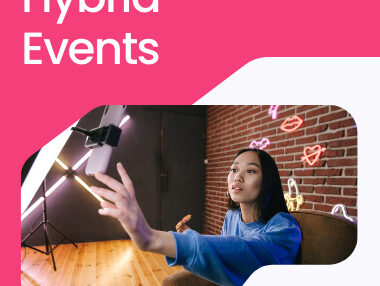 Why Event Planners Should be Outsourcing Remote Teams 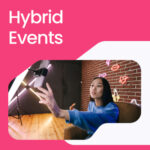 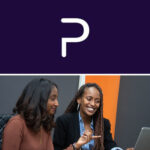 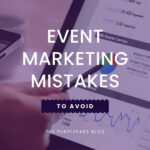 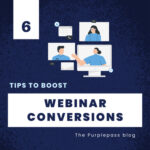 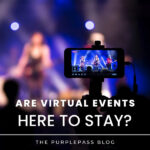